You are at: Big In Finland » Helsinki » Tavastia Klubi: rock and metal concerts in Helsinki

Today’s post is a collaboration with our reader Elisabeth Queen (facebook | Youtube). She talks about one of her favorite spots to see live Rock and Metal music in Helsinki (specially on New year’s eve) the Tavastia Klubi and its former New year’s eve traditional festival.

A trip to Helsinki isn’t complete without a night at Tavastia Klubi (official page). It is also a must-see for any fan of Finnish rock and metal. But first, let us give you some history: 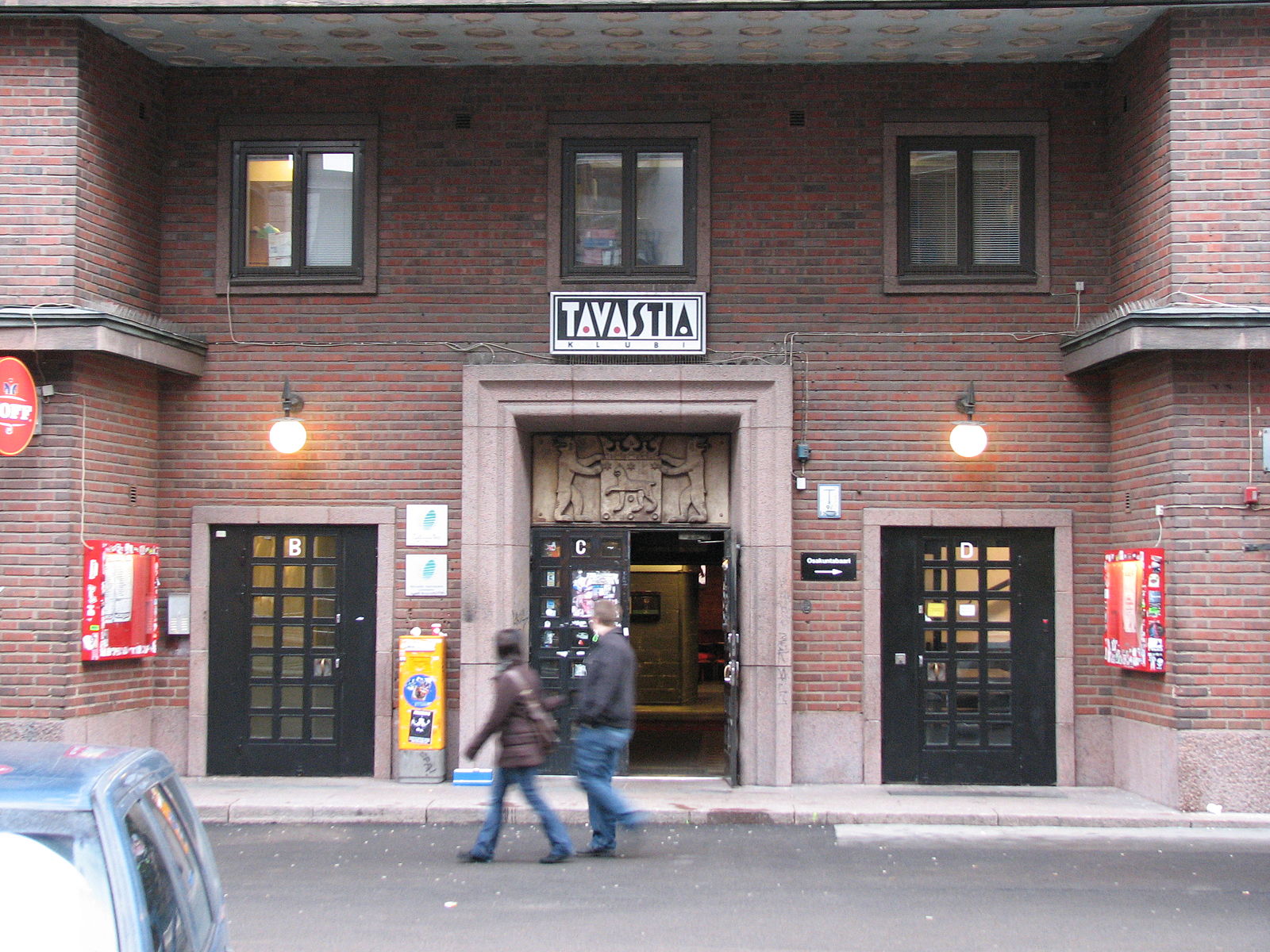 The entrance to the Tavastia Klubi, from the street Urho Kekkosen katu 4–6. Source (CC: by-sa)

Tavastia: from its beginnings to its status as a Helsinki icon

The Tavastia Club is a very popular rock music club founded in 1970 and it as been one of the main music venues in Finland ever since. With space for up to 700 people, it is located on the Urho Kekkosen Katu 4-6, and thus can be reached easily from the center of Helsinki by foot or train.

In 2010, to celebrate their 40 years – now 50! time travels fast -, Tavastia made a special exhibition with special objects of the concerts held there. For instance, you can see how on April 20th of 1966 Tom Waits (whose song “Big in Japan” was the idea for this blog’s name) played there. One can feel the pass of time when he finds out that the tickets cost the equivalent of 2,70 €. In the 70s artists like Dr. Feelgood or John Lee Hocker played there as well.

In the 80s the club was already established as a Finnish rock legend, and Finns could see in the Tavastia local bands that were going to be popular later on. The most important of them all, perhaps, was Hanoi Rocks. It was also the place to see international artists, such as Fabulous Thunderbirds, Nico, Dead Kennedys, The Pogues or Nick Cave.

Throughout the 90s and 2000s we could see in it the advancement of new Finnish rock and metal bands with great international success, like The 69 Eyes, Amorphis, Children of Bodom, Nightwish, Stratovarius, Sonata Arctica, Tarot, The Rasmus, HIM, etc…. Also new international artists such as The Offspring, Anathema and Paradise Lost visited the club as their preferred location in their Finnish tour.

In 1994 a new club was founded in Tavastia’s cellar, called Semifinal Club. This club that specialized in bands that were just starting and bands that had a small following. The cellar can host 150 people.

Besides daily concerts in the Tavastia Club, it can also be rented for private events, parties, conferences or really any kind of event. 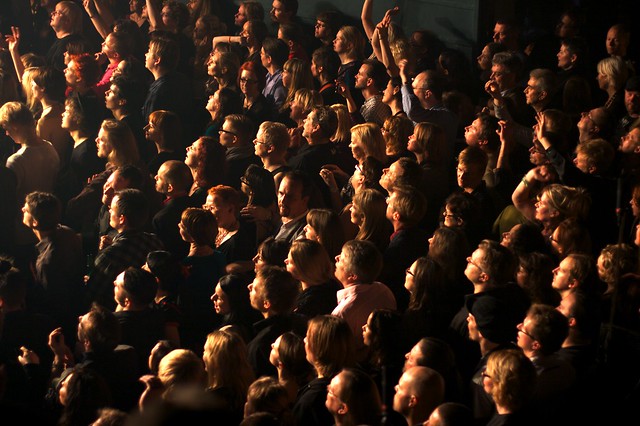 The club is a popular place. Source (CC: by)

Helldone Festival: the end of the year festival in Tavastia

If people outside Finland know Tavastia it is mainly because of its end of the year festival. A festival that, unfortunately, doesn’t happen any more.

It was 25 years ago when HIM made their first show on New Year’s eve in Tavastia. That marked the beginning of a tradition that developed quickly into the Helldone Festival: the new year’s party at the club.

At the beginning, this festival started as a 3-day-event (from 29 to 31st of December) and later on it was added a new day (thus, from 28 to 31st of December). 2011 was a strange year because there was no festival, and at some point it also was celebrated in 3 cities of Finland (Oulu, Seinajöki y Tampere).

The tickets for this festival were usually sold out around September. I remember I tried year after year to get some tickets and the third time was the charm: I got them.

Besides HIM, who played every year, some other popular bands that have played in the Helldone Festival are Fields of the Nephilim, Paradise Lost, The 69 Eyes, Anathema, Cathedral and Children of Bodom. 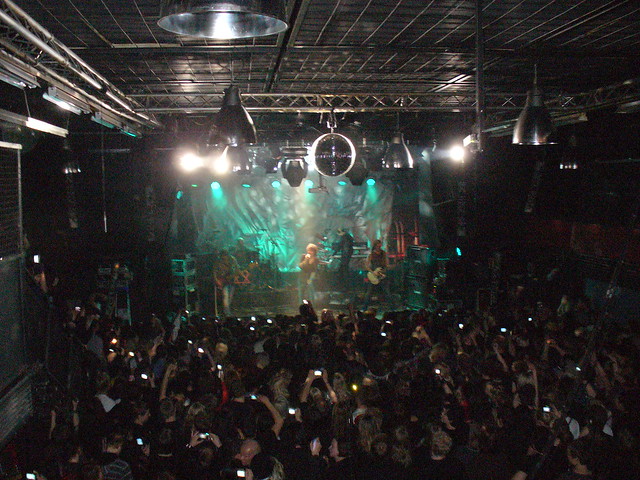 HIM played each year in the Helldone Festival. Source: Elisabeth. 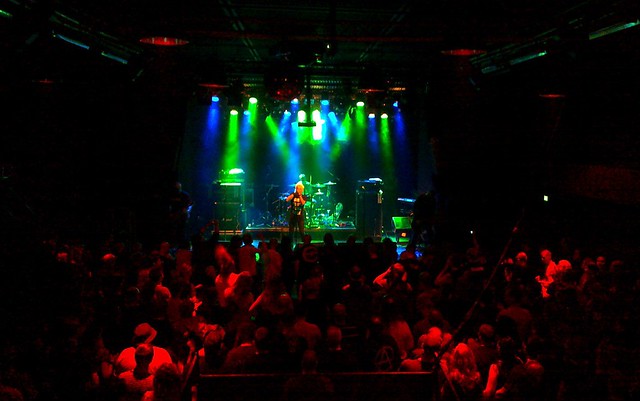 That’s how you live a night in the Tavastia Club. Source (CC: by-nd)

My experience in Tavastia and Helldone

Here come a few tips and “good to know” things about the club. The best places to see concerts at the Tavastia are either from the area above or below (remember this tip!). The sound and acoustics, and of course the environment, are really good. You get to enjoy the best of the Finnish rock and metal culture. Bar prices are about 8€ for a long drink and the wardrobe is 4€ per person.

Another good thing of the Tavastia is that there is no cover charge to get in unless there is a special concert, so you can see up and coming bands at no cost. On their website they announce the concerts and prices of the tickets.

Don’t raise your expectations too high: it is only a bar. Nonetheless the environment and feeling are unique. It holds that magic that made it famous and you know that there, in the stage, the best of the best of the Finnish rock and metal bands have played.

P.S. Next to the Tavastia Club entrance there is a huge record store. It comes in handy when you are queuing and you want to make the most of your time. 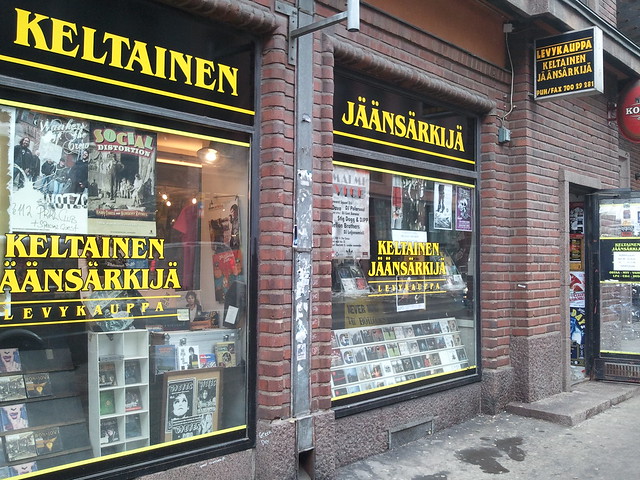 The Record Store next to Tavastia. You can wait to get in and window shop at the same time. Source (CC: by)

Have you been at Tavastia Club or to the Helldone Festival? Would you go then after reading Elisabeth’s experience? Let us know in the comments.

Finnish Beer: the strange classes and levels
The Finnish Armed forces abandon the Swastika as a symbol

Finnish Beer: the strange classes and levels
The Finnish Armed forces abandon the Swastika as a symbol