You are at: Big In Finland » Interesting facts » The 40 words for “snow” in Finnish

The 40 words for “snow” in Finnish

How many times have I heard the story of country X – or population X – that has 40 words (or more) for “snow”? Most of them said that the Sami people – indigenous population of the Nordic and Scandinavian countries – was the population with the most words for the white-falling element.

It is true that there are 40 words for “snow” in Eskimo, Sami language or Finnish?

It depends. If we say that in Sami or Inuit languages there are 40 or more words for “snow” is not true: it is an urban legend. 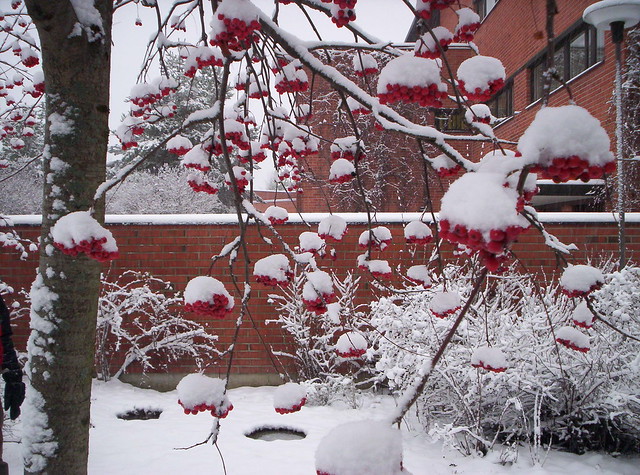 The word for this (although on a bigger scale) is “tykky”, as we’ll see in a moment.

This blog (specially its much more content-filled Spanish version) has been online for a few years and, every time I heard about the 40 words, I made a quick research and I always reached the same conclusion: there is no single source that list those.

The truth is that the Finnish language – not the Sami – does have 40 words for snow. Or, at least, if we widen the concept of what “snow” is to anything that is a frozen precipitation. And I did find a place where they are all gathered.

Summarizing: there aren’t 40 words for snow in Eskimo, Inuit or Sami, but they do exist in Finnish… with the condition said above. Definitely something to add to our list of curious facts of Finland.

The 40 words for “snow” in Finnish language

We have to thank gn0sis, from everything2 to gather the list with these 40 words, ending the myth and the status of urban legend about this fact. You can read them in the link, but I’ll also add them below. Some of them are very concrete in Shakespeare’s language (hard to grasp for non-native speakers), but I’ll try to explain. 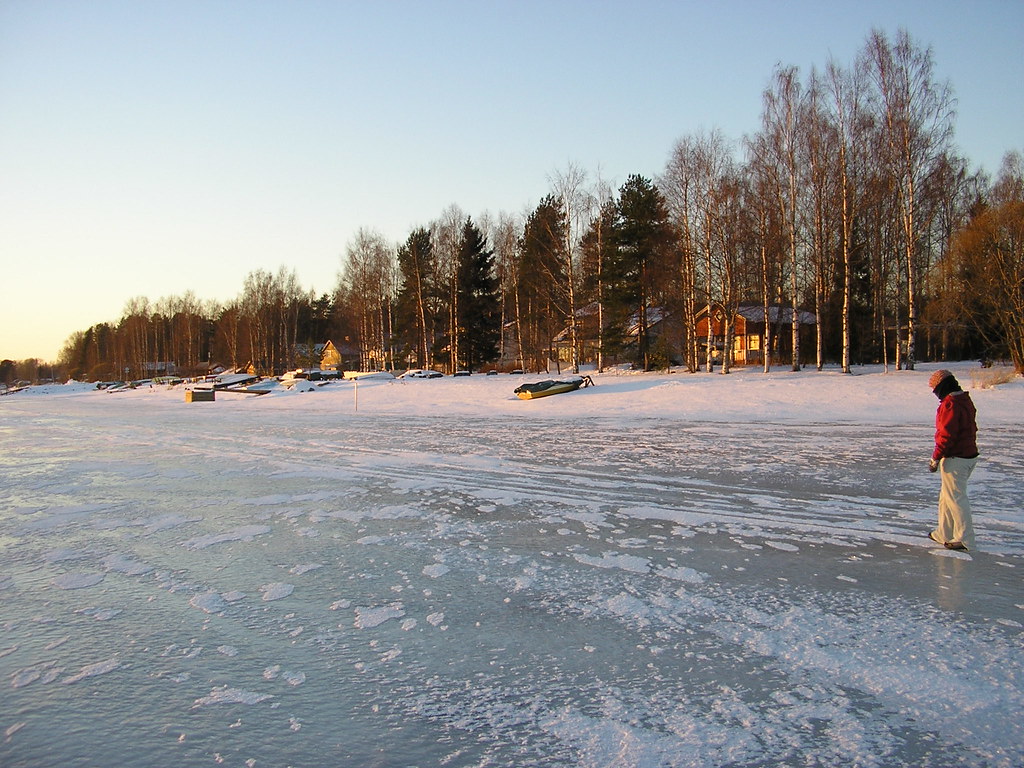 Ice and snow: material for many words in Finnish

As our collaborator Natalia says there is no verb in Finnish for “snowing”. They call it “sataa lunta“: it rains snow.

The list of (more than) 40 words in Finnish for the snow that gn0sis details is the following.

Frozen precipitations that are still falling

For what you see in this photo we can use word #12: ahtauma. 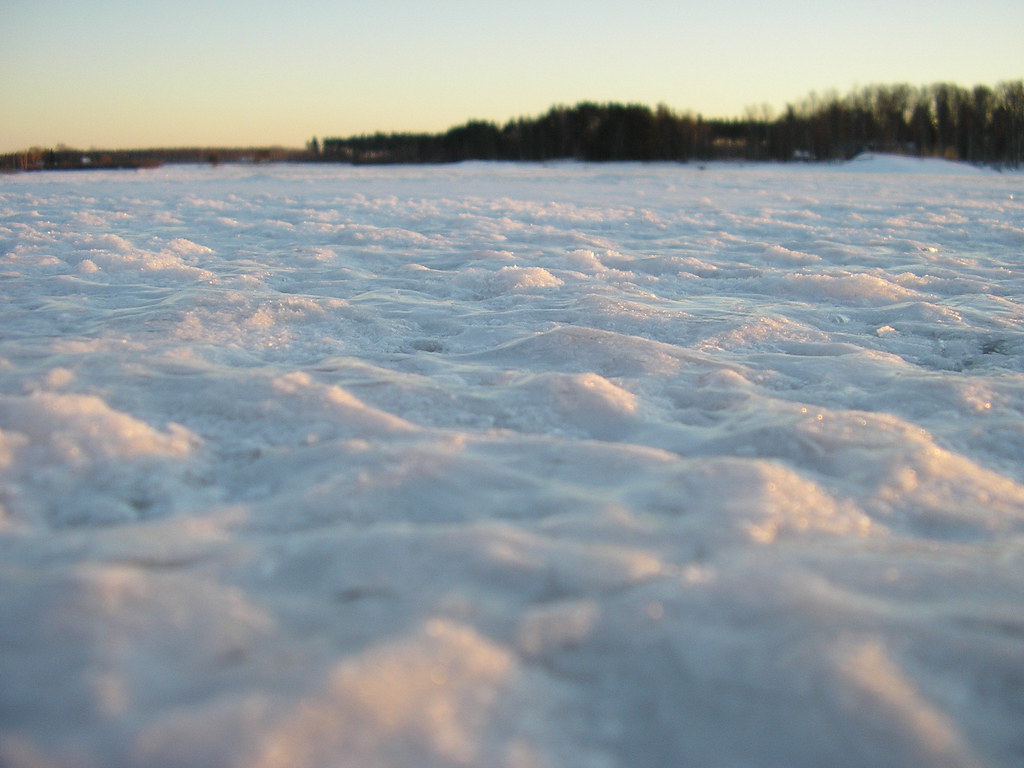 This type of ice that is not smooth, over a lake (in this case Joensuu’s lake) would be – in one word – röpelö

Frozen precipitation over the ground

20.- iljanne: a thin layer of snow atop ice
21.- hanki: a even layer of snow on the ground, especially if it is enough for skiing
22.- huurre: rime; granular frost (like the one you can find inside your freezer. Coincidentally, your freezer could be up to 20 degrees Celsius warmer than the temperature outside. You don’t believe me? Check out this photo)
23.- härmä: frost
24.- kinos: snow drift; a loose pile of snow, especially one formed by wind
25.- kaljama: a thick layer of ice on the ground. Something that made me fall from my bike many times, actually
26.- kuura: hoarfrost; frozen dew
27.- nietos: a large, hard pile of snow (could be refrozen)
28.- nuoska: “snowballable” snow, usually formed when powdery snow melts a bit
29.- polanne: a hard layer of compacted snow
30.- tykky: large chunks of snow, especially when frozen onto trees
31.- viti: freshly fallen powdery snow 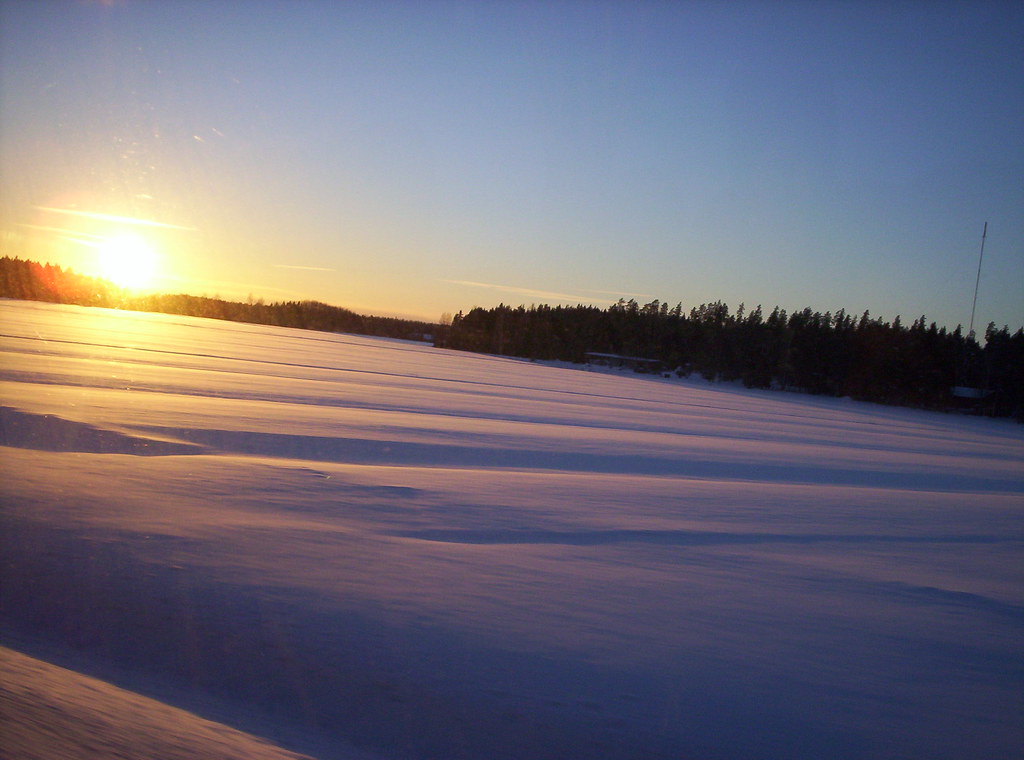 I believe this to be “hanki”.

Frozen precipitations that suffered alterations from humans or animals

Onomatopeyic verbs for “walking over the snow”

Of course even if there are more than 40 words to describe frozen precipitations and what happens to them, they are rarely used. You won’t find a Finn that uses these words among the most frequent Finnish words, as many people don’t use most of the words that exist in their language.

In the original list we liked before there are some more words that come from Finnish dialects and regional words from Lapland (where, for instance, “mora” means “un-skiable non compact snow”), Tampere, etc. You can see all of them clicking on that link.

What’s your favorite word for snow in Finnish? How many words did you hear (as an urban legend) that the Inuit, Eskimo, Sami, etc languages had?

4 Responses to The 40 words for “snow” in Finnish