You are at: Big In Finland » Misc. » Sex in the sauna: 3 experiences

Sex in the sauna: 3 experiences

The thing goes like this: Whenever I am talking to someone about Finland or the Finnish sauna for the first time, it is almost guaranteed that they will ask me, in confidence, if the sex in the sauna thing is actually real. There are questions about if it is a good place to do it, if it is sexy, if everyone does it…

And at the same time it is strange to find someone who, having lived in Finland, hasn’t tried sex in the sauna yet.

Because of that, for everyone to know more about it, I write today’s post.

The sauna and the temperature

There are 3 types of sauna in Finland (albeit many strange ones). The Finnish sauna doesn’t have as much steam as the Turkish baths, but is in my opinion way nicer. To make the 90 degree Celsius sauna a bit more humid, you have to throw some water over hot stones. That will bring the heat up. 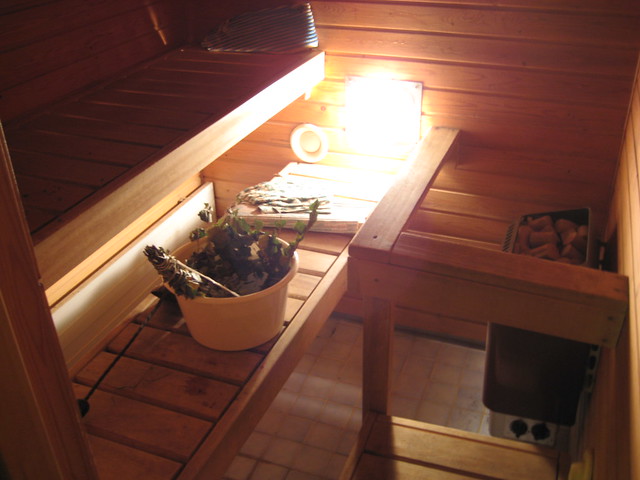 The stones are on the right, over the oven. Source (CC: by-sa).

These temperatures alone should remove the sex in the sauna idea from everyone’s heads. But because the heat is hard to imagine if you’ve never had a Finnish sauna, the idea remains.

Naked in the Sauna

I’ve heard on some occasions that Finnish people don’t talk to strangers, but they go naked into the sauna with them. And it is partially true.

Another factor that suggest the idea of sex in the sauna is the nudity. Finns, unlike people from other countries, are not uncomfortable with the idea of being naked in front of others (this is also true for many Eastern European countries).

For the Finns, showing yourself naked in front of other people doesn’t necessarily have sexual connotations. The sauna can be mixed, both men and women – this isn’t as common outside family environment, but it happens -, and being surrounded by naked people of the opposite sex, it is normal to think about sex in the sauna. In the same way, if you google “sauna” and go to the image section, it is not uncommon to see images with sexual connotations (although, as with many other things, the image shown isn’t the real thing).

Even in countries where towels or swimsuits are required sauna equipment, the sex in the sauna idea remains in the collective imagination.

Sex in the sauna: experiences

I’ve asked several people who have lived in Finland for some time about this. All these people share their nationality with me and we’ll leave their personal details aside so they can tell us without embarrassment and openly about their experiences with sex in the sauna.

The first experience is this one: “I had this idea in mind before going to Finland. One day, in a rented sauna in my building, I could finally try it. The sauna wasn’t too hot in the beginning because we just started it, and there was nobody inside before us. In any case everything was getting hotter and hotter, and dry, but without reaching 80 degrees Celsius. I think we tried throwing some water over the stones once to make the sauna more humid, but it wasn’t a good idea. We should have thrown it over ourselves.

With all the heat you don’t really enjoy it, and I don’t think I will try again. The wooden benches aren’t too comfortable either. I have a further recommendation: remove all your gold or metal bracelets and necklaces: they’ll get extremely hot against the skin and you can burn yourself.” 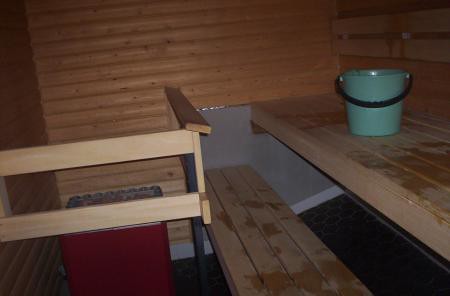 The sauna benches aren’t too comfortable.
The second testimony also talks about how complicated it is to have sex in the sauna:

“Finland, a party next to a lake and some alcohol (pretty cheap, I remember) is the best combination to get to a not so recommended idea. Suddenly you see yourself in great surroundings, surrounded by trees in the middle of a forest, dancing to music from other countries, and then an idea hits your mind (in this moment it is good to remember that the ideas influenced by spirit drinks aren’t as good as they initially seem). “Hey, there is a sauna here!” you say to yourself, while you tell your current sexy buddy your great/erotic idea.

So there you are, a bit tipsy – something also not recommended for a good session of sauna – and heating up your surroundings with your own body… and 5 minutes after starting you realize you can’t breathe. “Am I dying of love?” you ask yourself. And no, it is probably a heatstroke because of all the sport you’re doing in a closed room at 120º degrees. And pray for not having anything metallic on you: bracelet, watch, necklace… that will increase its temperature thanks to the love and to the burnt wood up to 500%… so be careful with the burns…

Summarizing: sex is good everywhere, but there are better places to do it than in a sauna.” 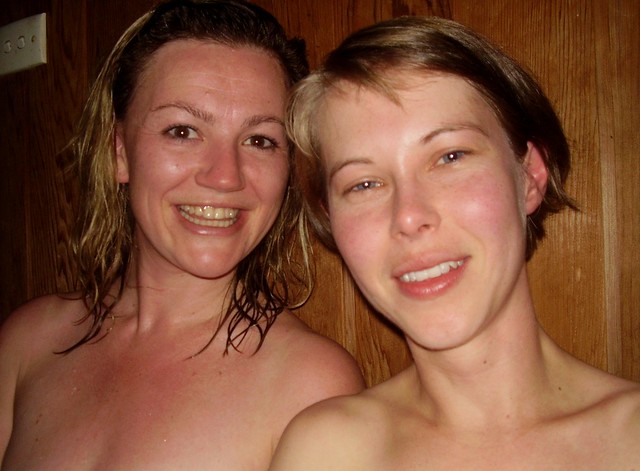 Some girls in the sauna. Source.

The third story about sex in the sauna tells us the following:

I have to say two things about that. One, that I also thought this way, specially if you’re with someone who is more than a friend, and that I finally changed my mind. Two, that the Finns don’t think like that. For them the sauna is a place for cleanliness, relaxation (no, not that kind of “relaxation”…) and it has no sexual connotations, something that in the south of Europe might sound peculiar.

And even though I tell you that, there will come the day that you’ll want to try it nvertheless. Because, damn it, it will still be on your mind to try it out for yourself. My advice: don’t do it, not it the sauna at least. If you suddenly feel the passion, get out of the sauna, into the shower area or into the dressing room (if it is private, of course. If is public that is up to you…) and it will be much better.

I am no doctor, so I can’t give that kind of advice, but with the temperatures of the sauna, such an active exercise can be very bad for you, especially if you suffer some sort of heart disease. It is very hard for people to simply sit in the sauna for 10 minutes, so imagine how it would be if you add the sex in the sauna exercise on top. And you don’t want to do it quickly, right? Sauna is for relaxing.”

Another person I asked for this post told me that, indeed, Finns see the sauna as being an almost sacred place. A place for cleanliness and purification. A place where babies used to be born because it was sterilized, and that nobody in Finland would think about using it for sex.

That, and simply standing the heat is enough trouble inside a sauna.

Do you have some sex in the sauna experience? The comments are open, and you can comment as anonymously as you want.

10 Responses to Sex in the sauna: 3 experiences