I’ve been through all kinds of weather in Finland, most of it in Joensuu, in the middle of the country. I’ve yet to write an extensive guide that covers what to wear in Finland throughout the whole year, but now that winter has come around – something that can be daunting for those who have never been to the Nordic (and Scandinavian) countries [1] – it is time to cover the most important basics: what to wear in Lapland and Finland in winter. 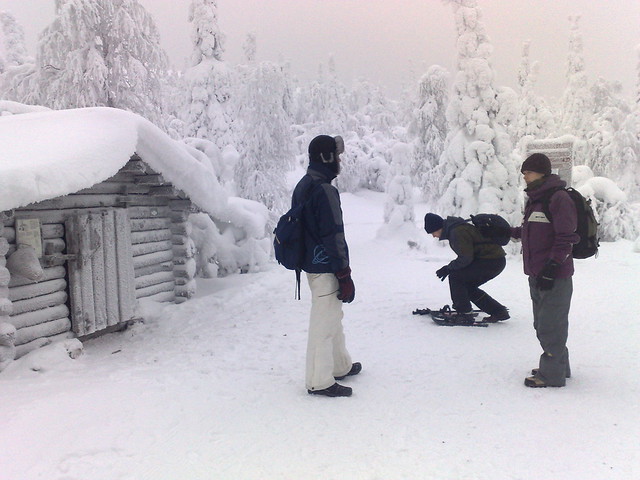 Some people outdoors in Lapland in Winter: wearing the right clothing is essential. Source (CC: by) [2].

The necessary clothes for the Finnish winter and its temperatures

Finland’s climate – especially in Lapland – makes the winter an extremely long one, lasting up to half a year. In October the average temperatures are already below zero and snow starts falling. Although the current winter has been extremely mild, it’s not uncommon to have snow for up to six months a year.

Because of that, warm clothing becomes essential for good living – and surviving, if you’re not a natural born Finn – since the temperatures can dip to -30° Celsius in most parts of the country. It is not something to take lightly.

Having lived in North Karelia, I wanted to ask someone who had lived the most extreme climate of them all: Lapland. I asked Miguel [8] and these are his recommendations.

What to wear in Lapland and Finland for the extreme cold: the layering process

“If you have ever experienced -20º Celsius, the question of what to wear in Lapland and Finland becomes much simpler: what did you wear in those temperatures? Once the thermometer goes below -15º Celsius, you don’t notice the difference between that and even colder temperatures anymore. 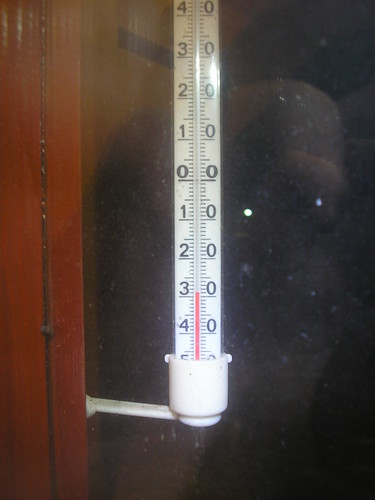 30 degrees Celcius below zero. That’s 25 degrees lower than your freezer.
You can bring your own gear from your country, but check out the prices beforehand. In some countries it will be cheaper to buy the clothes home and bring them over in your luggage, but in some cases it is quite the opposite, and in Finland you will find everything you need. For the extreme cold you will need a number of layers, always depending on how cold it is and how much you can stand the “normal” cold.

The first layer when you want to know what to wear in Lapland and Finland is similar to pajamas – something like long johns – not only on the lower half of the body but also the upper.

The second layer would be a layer of clothes made out of fleece, both for the legs and the upper body. Regarding the trousers you don’t need to go overboard: anything is good as long as you feel comfortable. Fleece clothing can be interchanged with thermal clothing for this second layer.

The third layer for your trip to Lapland or Finland in winter, or if you are going to live there (for instance for Erasmus) would be the snow clothing: a good jacket for the extreme cold and ski trousers. My choice and the choice of lots of my friends was Columbia and it served us well. 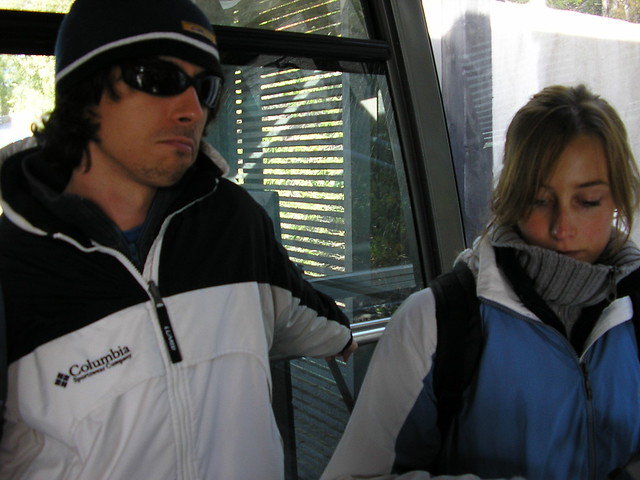 They will spend the day outdoors: we can see the third layer of clothing for the extreme winter in Lapland and Finland. Source.

What to wear in Lapland: Winter clothing tips for the three key places

These are the three key points to keep warm: feet, hands and ears.

For the hands and feet you always have the classic option of gloves and socks made of wool or made of special thermal fabric for snow and cold temperatures. I have special socks like that and they’re perfect, because another problem you face before going outside when you’re indoors is that you start sweating. That’s something that can worsen your day: you’re going to feel like your feet get frozen. Special fabric helps with that.

My trick to avoid this for the hands is to wear some thin gloves, those black thin ones everyone has, and over those the key to real warm hands: mittens. Perfect.
Don’t wear just gloves for anything in the world, even if they’re skiing gloves. Mittens made out of leather with an inner lining of shearling: that’s the only thing to wear. You can even have them smoker-friendly [9], if you smoke.

Regarding the feet and the shoes, there is a wide variety of boots adapted to the extreme cold, from more formal shoes to the classic rubber boot with shearling on the inside. Possibly, the latter will be the best, and for the most cold-averse, adding a sole made out of shearling will definitely do it. 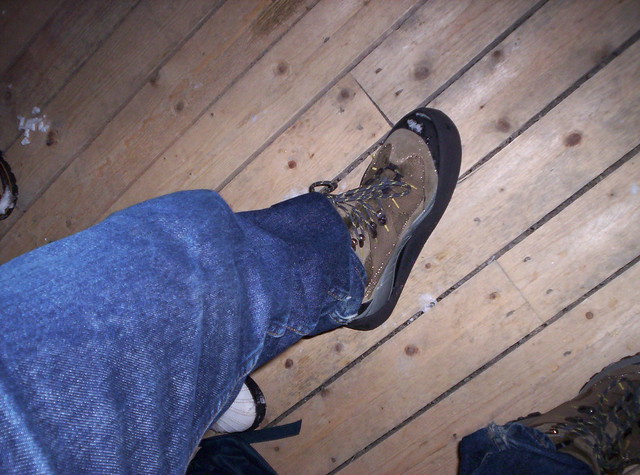 Nice gore-tex boots were the choice for many, me included. They lack glamour but damn, they do the job.

Don’t worry too much about removing the layers and other clothing in Finland: if you leave them in public wardrobes they will be there when you come back for them. In Finland nobody will touch something that isn’t theirs [10].

Finally, for the head, good earmuffs are a must, and I can’t stress this enough. On top of that, a russian-like hat (lined with shearling or another kind of artificial animal-like fur) or a very thick woolen hat will keep your head warm. Don’t forget a scarf or a neck gaiter. On the coldest days the only thing that should be shown are the eyes (which eyelashes will have ice droplets attached to their ends). For the extremely cold-averse, a ski balaclava is the right thing. This is the best if you are going to use a snowmobile or if you go skiing in unusually low temperatures. We went once to Levi for skiing in February and going downhill at -18º Celsius wasn’t very enjoyable (the sauna [11] afterwards was, nonetheless). 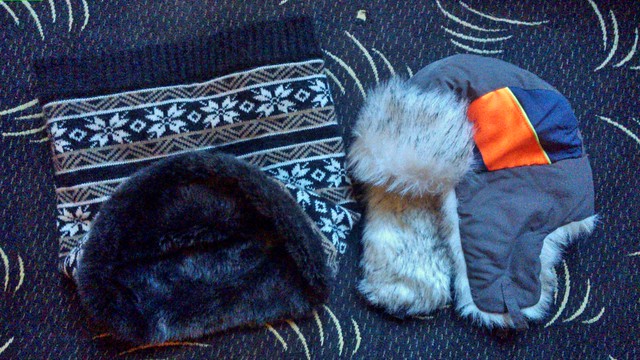 My neck gaiter with synthetic fur inside, and a russian-like hat.

Another thing many people do is to travel with all their clothes bought in their country, which is understandable if you don’t want to leave anything to chance. But why look for good and affordable mittens, gloves or shoes in another country when they are availiable here in any sports store for a good price. It might not be the best quality, but you probably won’t need that if you’re going to be only one week in Lapland (which is one of the best places to see the Northern Lights [12]).

All this advice for what to wear in Lapland is perfect if the temperature is quite low, and if you are going to spend a lot of time outdoors. For just small trips to the outdoors, for instance from the bus to the Santa Claus Village and back, you can survive with fewer clothes. My record is 5 minutes with a pullover at -25° Celsius.

I can’t think of anything else. Each person is different and some people will need a thousand clothing items while others can survive with less. Each one of us has to judge for ourselves how cold-averse are we when choosing what to wear in Lapland and Finland in winter, but with these tips you’ll be well covered.” 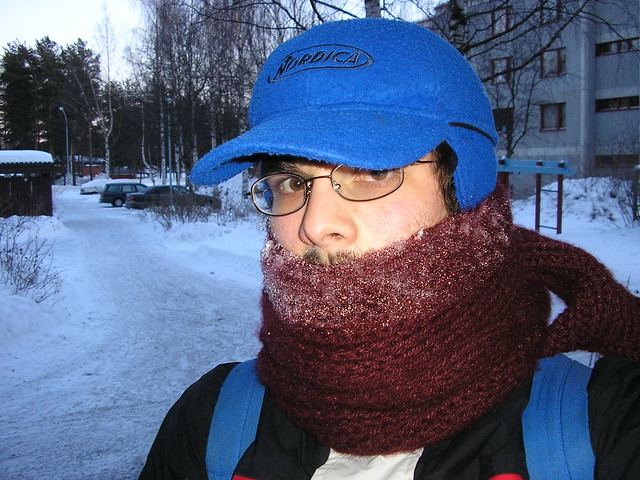 Summary: the necessary clothing for Lapland and Finland in winter depends on your activity

If you are going to be walking outdoors a lot and enjoying the landscape, the right clothing for Finland and Lapland will be a combination of the three layers mentioned above.

If you aren’t going to be outside much, instead spending long periods indoors, it is better to leave out the first layer and dress only with the second and third: you will remove the third layer when entering a building and will stay indoors with your normal clothes, without overheating from the first and second layer.

Do you have further advice about what to wear in Lapland and Finland in winter? Do you recommend a concrete brand of clothing or shoes?